My copy of Chatterton arrived yesterday. If you order your copy today, you will not be sorry! I don’t want to give anything away but it is an stimulating tonic for the creative mind… 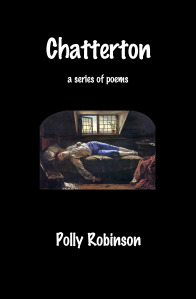 ‘Chatterton’ is  a series of poems about young and starving poet in a garret, Thomas Chatterton. He was 17 years old. Did he commit suicide or not?  You decide.

My series of poems, in an elegant pamphlet (thanks to Black Pear Press), is from the viewpoints of those who loved or were somehow influenced by ‘the beautiful boy’. I imagine them gathered around the foot of his deathbed, remembering and commenting on his life. Each individual, from his mother to his doctor to various poets, have their own poem about him.

I’ve loved the Henry Wallis painting – shown on the front cover of the pamphlet – since I studied the pre-Raphaelites many moons ago – it’s the inspiration for the series. And I was asked to do a potted history of Thomas Chatterton – it appears in the final pages.

There’s a limited first edition of 50 copies and…

A wanderer who has found home and herself in the South of France. View all posts by Léa

10 thoughts on “Chatterton – a Series of Poems”

This site uses Akismet to reduce spam. Learn how your comment data is processed.